This post may contain affiliate sales links. As an Amazon associate, we earn commission on qualifying purchases you make. Please see our privacy policy for full details.
Jump to Recipe Jump to Video Print Recipe

Crispy on the outside and dense and fudgy on the inside, these are the best blondies I've ever had! They have a caramel and butterscotch flavor, but are much easier to make!

You can add blondies to the long list of classic desserts that I just never got around to trying for some inexplicable reason.

Before trying blondies, I just imagined they would taste like brownies, but without the delicious chocolaty flavor! BUT blondies turned out to be an amazing dessert on their own.

Before trying blondies, I went on a googling spree asking "what do blondies taste like????" But with more question marks.

After trying them myself, I can best describe blondies as tasting like a mixture of fudge and caramel! They weren't as similar to brownies as I thought they would be, aside from the similar texture.

When it comes to the flavor, brownies tend to taste more fudgy, while blondies taste more caramel or butterscotch like. What's amazing about blondies is the fact that they taste like caramel!

No need for candy thermometers to get the taste of caramel and butterscotch when you have blondies.

How to store blondies:

You can store blondies in the fridge, but I recommend heating them in the oven (or at least letting them come up to room temperature) for best taste and texture! The blondies will keep for up to 1 week in an airtight container in the fridge.

You can also freeze blondies for up to 3 months! Keep in a freezer safe, airtight container or plastic bag. To defrost, leave out at room temperature for a few hours, or in the fridge overnight.

I recommend warming in a preheated 350°F oven for about 5 minutes before enjoying. Blondies are best served warm!

If you ask me, NOTHING beats a few slices of plain blondies with a scoop of vanilla ice cream!

While plain blondies are delicious, there are like a million different ways you can change these blondies up!

Pfew, I'm out of breath! And those are just top of mind!

If you liked these blondies, check out some of these other recipes! 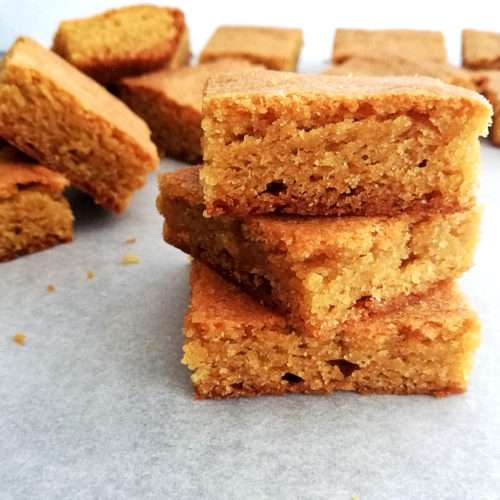 Crispy on the outside and dense and fudgy on the inside, these are the best blondies I've ever had! They have a caramel and butterscotch flavor, but are much easier to make!
5 from 1 vote
Print Pin Rate
Prep Time: 10 minutes
Bake Time: 20 minutes
Total Time: 30 minutes
Servings: 16 squares

This site uses Akismet to reduce spam. Learn how your comment data is processed.

This website uses cookies to improve your experience while you navigate through the website. Out of these cookies, the cookies that are categorized as necessary are stored on your browser as they are essential for the working of basic functionalities of the website. We also use third-party cookies that help us analyze and understand how you use this website. These cookies will be stored in your browser only with your consent. You also have the option to opt-out of these cookies. But opting out of some of these cookies may have an effect on your browsing experience.
Necessary Always Enabled
Necessary cookies are absolutely essential for the website to function properly. This category only includes cookies that ensures basic functionalities and security features of the website. These cookies do not store any personal information.
Non-necessary
Any cookies that may not be particularly necessary for the website to function and is used specifically to collect user personal data via analytics, ads, other embedded contents are termed as non-necessary cookies. It is mandatory to procure user consent prior to running these cookies on your website.
SAVE & ACCEPT