This post may contain affiliate sales links. As an Amazon associate, we earn commission on qualifying purchases you make. Please see our privacy policy for full details.
Jump to Recipe Print Recipe

Making sour cream at home couldn't be any easier! All you need is some Greek yogurt, an acid, and 5 minutes of your time.

I wasn't ever big on keeping sour cream stocked in my fridge. Mostly because I never used to be able to use it all up before its best before date. But if ever I got a craving for some sour cream glazed donuts, sour cream pound cake, sour cream cupcakes, or sour cream whatever else, I always had the power of DIY as my backup!

I find yogurt is a bit more of a common household staple, so it's more likely you keep it on hand - and you can use it as a substitute in any baking recipes that call for sour cream. The taste will be ever so slightly different, but I haven't met a dessert with yogurt substitute that I didn't like!

** It is important to note that this is a sour cream baking substitute! It's meant for cakes, cupcakes, muffins, and the likes. I have never tested this substitute for cooking or eating raw - but I don't image it would be very good for those uses!

Before we get into the nitty gritty of the exact measurements, let's go over what the purpose of sour cream is in baking! This'll make it easier to figure out how this substitute checks all of the boxes.

If you're not too concerned with the sciency, technical side of homemade sour cream, feel free to jump to the bottom of the post for the recipe!

What does sour cream do in baking?

Sour cream has 4 main features and functions in baking.

Those features are: tanginess / flavor, moisture / insulation against over baking, rise, and thickness.

Here's a look at each one in more detail:

Sour cream has a very distinctly tangy flavor when compared to other dairy products like milk, buttermilk, or yogurt. Because of this, many recipes use sour cream for its flavor.

In our substitute, we mimic this tanginess by combining yogurt with acid (either vinegar or lemon juice). Yogurt is naturally acidic, but not quite as acidic as sour cream, which is why you need the vinegar / lemon juice.

It won't be the exact same kind of tanginess as sour cream, but it'll be pretty darn close!

Adds moisture / Insulates against over baking:

Sour cream is quite high in fat, which makes baked goods super moist! It not only helps recipes last longer than they would if you just used milk, but the moisture that comes from sour cream also helps protect against over baking. And bonus: the fat also yields a richer final product!

For that reason, I recommend using full fat yogurt! It's the closest you'll get to sour cream without using ... you know, sour cream.

Now's not the time to start your diet!

One of the main reasons sour cream is used in recipes is because it creates an airier and more tender final product! This is especially pronounced in recipes that use baking soda. The acidity in the sour cream reacts with and activates the baking soda to create bubbles (which = tender and delicious cakes/muffins/cupcakes/etc.!)

If you think back to a science experiment that most of us tried as kids, it's kind of like a baking soda/vinegar volcano ....... but tastier.

Again, we mimic this by using an acid mixed into the yogurt.

Since sour cream is thicker than milk, you can add more without watering down your batter. More sour cream will add more flavor, softness, and moisture to your treats, without throwing off the moisture content in the recipe.

Greek yogurt is ideal because it's slightly thicker, but plain yogurt works perfectly fine as a backup.

Did I bore you? No worries, that's the end of the technical talk!

Here are some recipes to try with your homemade sour cream!

Also, check out some of these other baking substitutes! 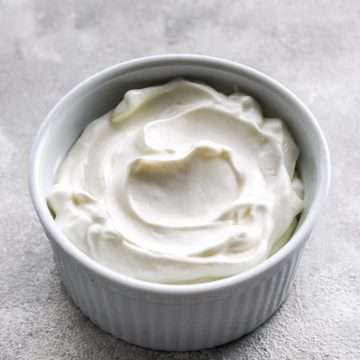 Making sour cream at home couldn't be any easier! All you need is some Greek yogurt, an acid, and 5 minutes of your time.
No ratings yet
Print Pin Rate
Prep Time: 5 minutes
Cook Time: 0 minutes
Total Time: 5 minutes
Servings: 1 cup

This site uses Akismet to reduce spam. Learn how your comment data is processed.

This website uses cookies to improve your experience while you navigate through the website. Out of these cookies, the cookies that are categorized as necessary are stored on your browser as they are essential for the working of basic functionalities of the website. We also use third-party cookies that help us analyze and understand how you use this website. These cookies will be stored in your browser only with your consent. You also have the option to opt-out of these cookies. But opting out of some of these cookies may have an effect on your browsing experience.
Necessary Always Enabled
Necessary cookies are absolutely essential for the website to function properly. This category only includes cookies that ensures basic functionalities and security features of the website. These cookies do not store any personal information.
Non-necessary
Any cookies that may not be particularly necessary for the website to function and is used specifically to collect user personal data via analytics, ads, other embedded contents are termed as non-necessary cookies. It is mandatory to procure user consent prior to running these cookies on your website.
SAVE & ACCEPT